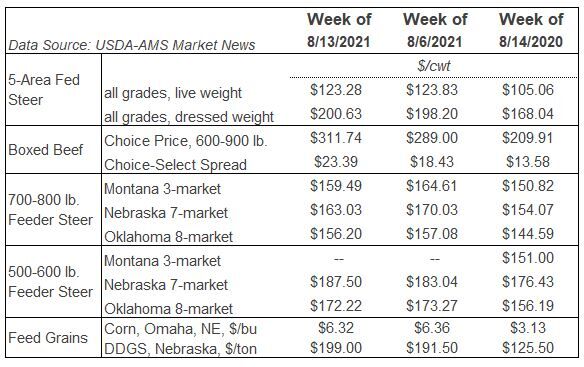 Friday, August 20th brings the next USDA Cattle on Feed report fewer placements, marketings, and cattle on feed than a year ago. The report will have some implications for beef production in coming months.

July marketings are expected to be down about 3 percent from last year. Given one less “slaughter day” in July 2021 than in 2020 that means daily average marketings will likely be higher than last year. In relation to feedlot marketings and cattle slaughter, slaughter cattle imports from Canada were up in July about 23,000 head from last year. That data, however, includes both fed cattle and cull cows headed for a U.S. plant, so it’s difficult to parse out what might be contributing to fed cattle supplies and what is contributing to cow slaughter.

Placements are expected to be below last year, by some 6-7 percent. Feeder cattle imports in July from Mexico and Canada were below a year ago by about 45,000 and 20,000 head, respectively. Over the last 5 years, on average, placements have tended to decline slightly from June to July with last year being the exception. One area of interest in the report will be any evidence of drought forced earlier placements out of the West and Northern Plains.

Combining marketings and placements leaves the number of cattle-on-feed at more than 1.5 percent lower than a year ago. Total cattle-on-feed tends to decline seasonally from June to a low in September. Declining on feed numbers would be in keeping with the normal seasonal pattern. It would also reflect the longer term cyclical decline in beef cow numbers and the resulting fewer calves.

The cattle-on-feed report will likely provide more evidence of tightening fed cattle numbers and beef production to begin 2022. Beef production has been below a year ago for 5 out of the last 6 weeks. Average federally inspected steer and heifer dressed weights continue to run below a year ago, fueling the decline in beef production. It’s also worth noting that the amount of beef grading Choice as a percent of all beef graded has been below last year for about 7 weeks. Last week 72.3 percent of beef graded was Choice compared to 73.6 percent last week. Tighter supplies of Choice beef is likely keeping the Choice-Select spread wider than a this time last year and wider than the 5-year average.

It should be an interesting report with some longer term implications for beef supplies to end 2021 and begin 2022.

The Choice beef cutout continued to climb heading towards Labor Day. It’s not unusual to see the cutout increase a bit right before the holiday, but then it is striking given the larger than normal increase and the level of wholesale beef price. Local auction markets report generally steady prices compared to the week before.