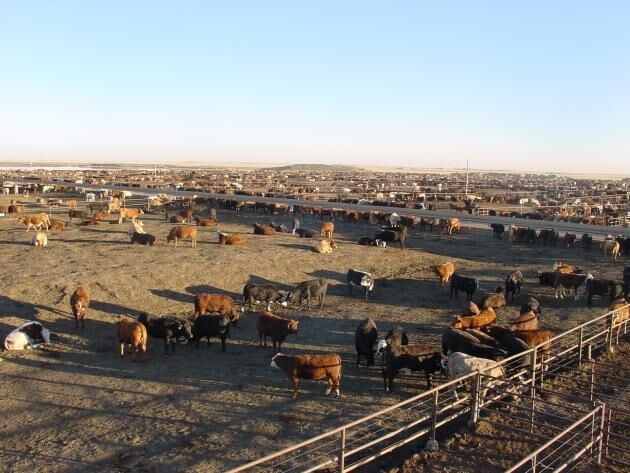 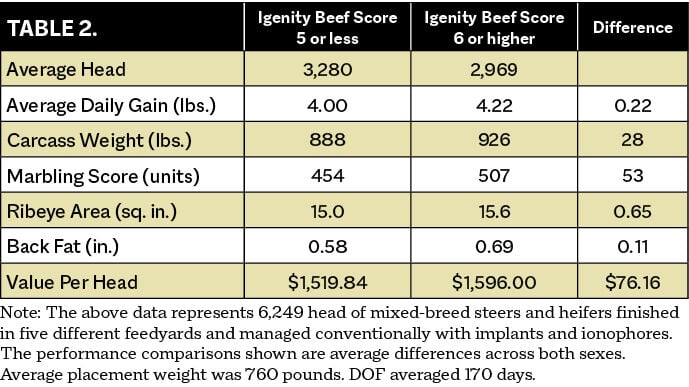 Predictable performance usually tops the list when feedyard managers are asked about desirable characteristics in feeder cattle they are considering for purchase. Better predictability means more accurate breakeven projections, which makes risk management a notch easier. Performance that exceeds expectations is advantageous, of course. However, no one likes negative surprises, whether it be disappointing gains and feed conversions, or poor grid results.

Fortunately, one important piece of the performance prediction puzzle is getting easier. Cattle feeders have long known that genetics matter in the feedyard. Yet, until recently, information on the genetic merit of specific groups of feeder cattle was unavailable. For this article, let’s first examine how genetics affect closeout and carcass outcomes. Then we will discuss where the beef industry is headed with the use of genetic information as a prediction tool to support the needs of cattle feeders.

Expected Progeny Differences have been available for more than 30 years. Most cattle feeders are at least somewhat familiar with EPDs. Many even understand what EPDs are designed to do and how to use them. Cattle feeders often own beef cows themselves and use EPDs for buying bulls and making selection decisions in their own herds.

EPDs are genetic predictions calculated by breed associations for a long list of traits. In the feedyard, important traits include post-weaning gain, feed intake/efficiency and carcass-value characteristics, such as carcass weight, marbling and ribeye size. Genetics are an important influencer of feedyard performance, but genetics get “mixed in” with other factors such as body condition, health, weather, implant regime (etc.), such that it becomes difficult to observe the effect genetics are having within a given pen of cattle.

When field trials are conducted to isolate the impact of genetics, the positive performance attributes of cattle with superior EPDs can be readily demonstrated. As shown in the table below, when progeny of a high-growth Red Angus sire were compared to progeny from a low-growth Red Angus sire, resulting carcass weights were closely aligned with EPD predictions. (Table 1.)

All 26 head evaluated in this study were out of a single embryo-donor dam and were managed together from birth to harvest. Even without large numbers, the genetic differences between the two sires resulted in a sizable divergence in real-world performance. Thus, cattle feeders can be confident that genetic tools available in today’s beef business can be used advantageously in identifying better performing cattle. Also worth mentioning, the difference in feedyard ADG between the two groups was 0.29 pounds per day, favoring the sire with higher growth genetics.

The table below is similar in that it compares genetically superior cattle to those with weaker genetics for important feeding and carcass traits. In 2019 and 2020, Neogen DNA tested a large number of feedyard steers and heifers with Igenity® Beef. This DNA test is designed for crossbred cattle and is therefore applicable to many different breeds and breed combinations. Igenity Beef results are categorized via a 1-10 scoring system, in which higher scores are more favorable, indicating the genetic potential for superior performance. To illustrate how genetics impact feeding performance, the cattle were divided for the traits of interest into groups of 1-5 (low DNA scoring animals) versus those that scored 6-10 (high scoring group).

There were meaningful performance differences for all traits between these two groups. Thus, cattle with superior genetics, as quantified here by Igenity Beef, tend to move through the feeding and carcass phase of production with superior performance. Their financial results are stronger too. The Top Dollar Angus brand logo is shown above cattle with scores of 6 or higher, because these high-end genetics are required for qualification. In addition to verified superior genetics, Top Dollar Angus qualification requires eligible feeder cattle and calves be at least 50% Angus or Red Angus. (Table 2.)

What Lies Ahead for Genetic Verification?

Because genetics directly affect growth, efficiency, and carcass performance, we can expect to see a growing percentage of U.S. feeder cattle offered with genetic metrics as part of their description. Information on health treatments and program qualifications (Natural, NHTC, GAP, CARE, etc.) is becoming more commonplace, and genetic data are certain to follow the same path. By 2030, it is quite possible that 25% to 50% of the entire feeder cattle population could be offered for sale accompanied by specific genetic information that is designed to assist feedyards in predicting cattle performance. This positive trend should motivate many cow-calf producers to reassess the makeup in their herds and ‘up their game’ genetically, making their cattle more appealing to feedyard buyers.

The top portion of the industry’s cattle is likely to be genetically identified first (such as with Top Dollar Angus). However, eventually, average cattle, and even some that are below average, will be genetically verified and sold with a genetic-merit label attached. Cattle feeders should find this information useful and may eventually begin to discount feeder cattle that do not have such data. Genetics of unknown cattle will simply be hard to predict and carry too much.