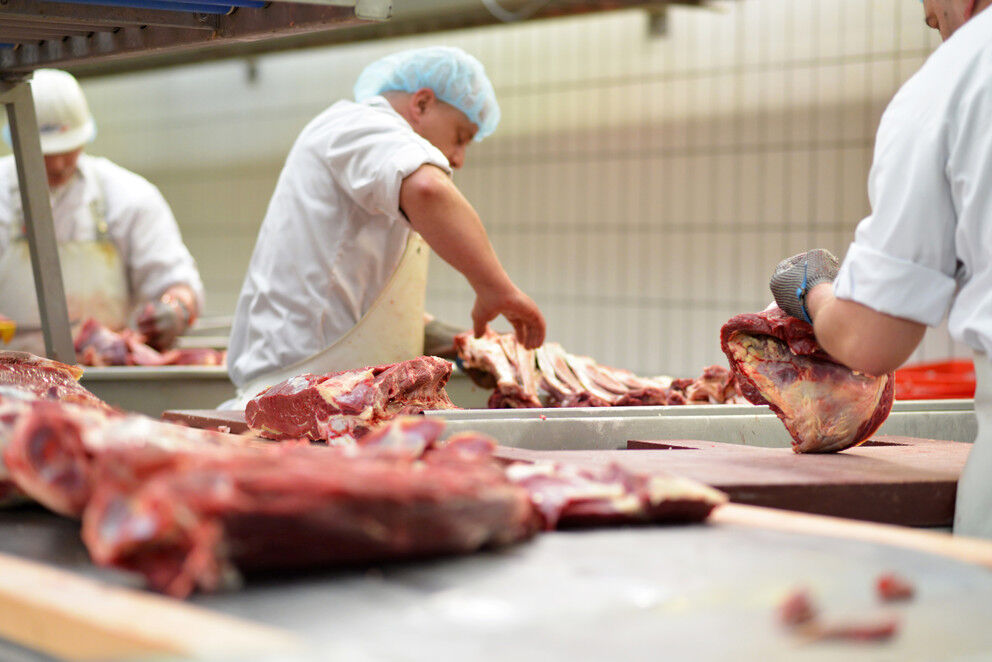 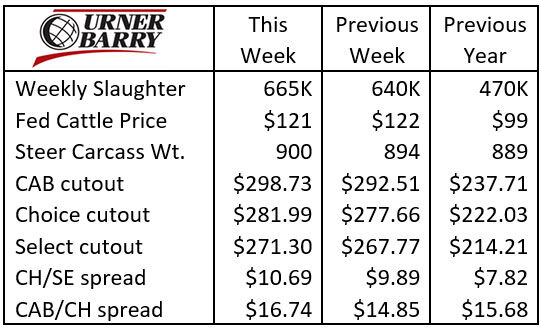 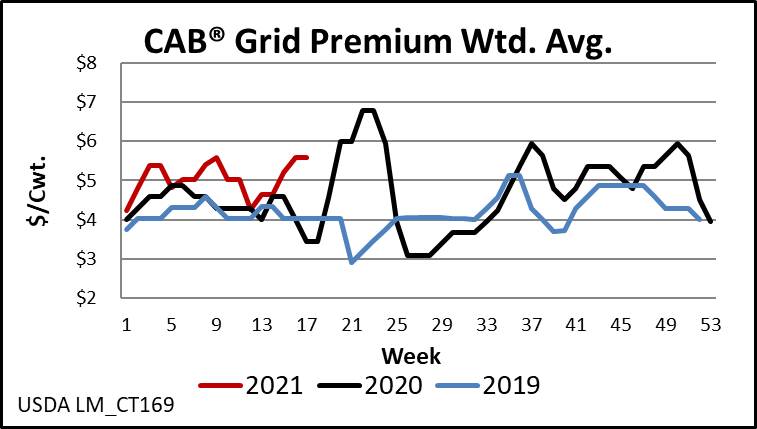 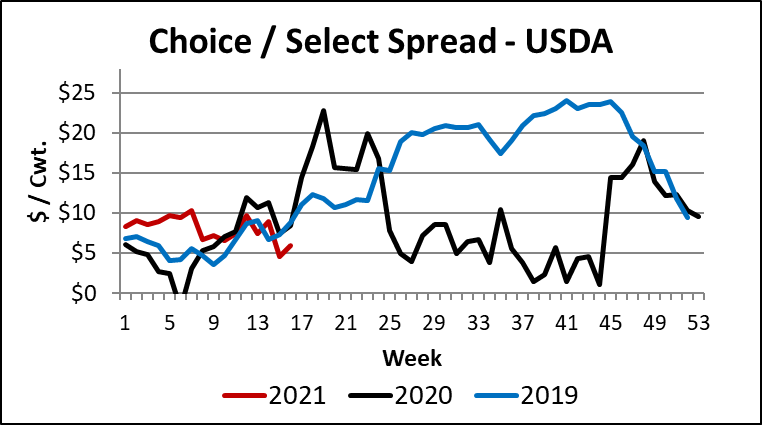 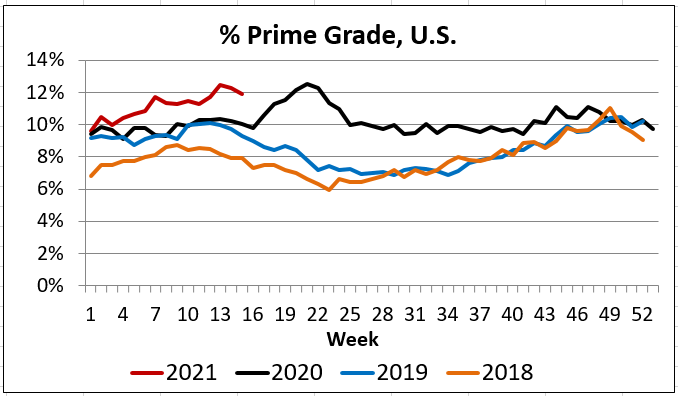 The federally inspected slaughter total of 665K head was 25K larger than the week prior, a welcome return to more robust numbers.

Industry slaughter capacity is still a bit unknown today due to COVID-19 safety measures being implemented in the packing sector.

Looking back to March 2020 when panic buying cleared retail shelves, packers were able to escalate the slaughter pace to 684K, the largest week of that month. Since personnel safety measures were implemented and a semblance of full slaughter volume had resumed last June, we’ve not seen a weekly slaughter total larger than 670K head.

Last week’s production was unencumbered by scheduled cooler cleaning or any plant breakdowns we’re aware of. With a robust 59K slaughter total on Saturday, it’s a fair assumption that the 665K total is near the top of what the packing sector is capable of, considering the available labor supply under the slower chain speeds resulting from COVID-19 personnel safety measures.

Spot market carcass cutout values continued to defy the odds last week with further advances. Current cutout values are easily a record for the week of April 12, with the previous record high for the week achieved in 2015. At that time, the slaughter head count was 24% smaller at just 503K on the tail-end of drought-reduced fed cattle supplies.

The carcass quality spreads saw mixed action last week as Select prices narrowed the gap on Choice. This stands to reason in the fact that Choice carcasses tend to shed some of their premium when boxed beef prices spike especially high. Seasonally, the Choice premium should climb into May, but that trend seems in jeopardy today as the Select grade is a very small category at just 12% of the total.

On the other hand, CAB carcasses are plentiful in the supply chain, the latest data showing the ninth straight week with over 40% of all eligible carcasses meeting the specifications in early April. Even so, the CAB/Choice price spread was richer last week at $16.74/cwt., up $1.89/cwt.

The beef industry finds itself in another odd position as market values are adjusting swiftly. Feed grains continue to react to global supply-and-demand dynamics with a bias toward even higher corn and soybean futures prices. Spot market corn prices are well over $6/cwt., invalidating recent cost-of-gain projections and at least temporarily pulling down feeder values.

In the beef output discussion, cutout values have rocketed to nearly $300/cwt. for the CAB cutout and $282/cwt. for Choice. Beef end-users have been hungry for product, weathering several weeks of disappointing production volume and tighter spot market supplies. The surge in restaurant reopening business has fueled buying activity amid these smaller-than-ideal production weeks.

In the meantime, the fed cattle market has been subject to a push-pull effect from market signals. The strongly positive and very abnormal June Live Cattle futures basis urged feedyards to push cattle forward, adding days on feed and weight. Projected fed cattle supplies didn’t justify the premium for the June contract, resulting in the April contract rightly moving to a premium over June. This now urges feedyards to change their approach to a more seasonally appropriate outlook: market cattle earlier this spring when possible to capitalize on the currently fading spring cash-price rally.

Impacts on the Certified Angus Beef ® brand are potentially mixed with the above factors. First, marbling and quality grade trends are running higher than expected for April. The brand just completed nine straight weeks of more than 40% of eligible cattle qualifying. This is far and away a record run and comes as the national Choice and Prime carcass percentages set records for the season.

Despite smaller than desired weekly slaughter totals this year, CAB carcass counts have mostly run higher than the prior two years through early April. This, again, is due largely to record CAB carcass acceptance rates driven by higher marbling levels.

The CAB carcass cutout premium to Choice is much larger than the Choice/Select spread and has averaged $16/cwt. in 2021 on the heels of a $17/cwt. average in 2020. For the past two weeks packers reported to USDA that they’d average $5.56/cwt. for CAB carcasses on their grids. The high of this week’s range is $13/cwt., most likely on a grid with a minimum CAB percentage threshold before premiums are realized.

We’ve been doubling down on tracking carcass marbling and quality grade trends this spring. Combined Choice and Prime carcasses have defied history on a record grading pace through early April. The February and March spikes in quality grade were erratically higher than seasonal trend lines would predict, even at the new record pace.

Quality dwindled at the conclusion of March in more predictable fashion into the first week of April as yearlings in the fed cattle supply became a smaller factor. Even so, those paying close attention to carcass weights and quality grade noted the extended timeline in which yearlings were prevalent.

Latest USDA data shows the Prime grade slipping fractionally from 12.28% to 11.91% during the week of April 12. Both Choice and Select were slightly higher in the mix during the same week. Weekly CAB Prime carcass counts have followed the pattern with a lower trend over the past three weeks following a very strong run.