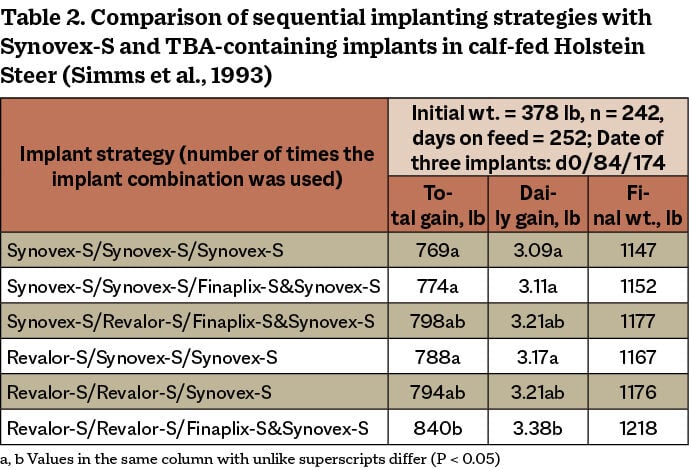 Beef from Holsteins accounts for about 20% of the total beef production in the U.S.; and Holstein animals represent 16% of the total fed cattle slaughter in the U.S. Holstein steers differ physiologically than beef breeds in that they have lighter muscling and altered patterns of fat deposition. In addition, Holstein steers are usually put on feed at a relatively young age and finished out with longer days on feed. Implant strategies for Holstein steers deserve attention as the strategy should differ from traditional finishing beef cattle.

Like most implant studies conducted with beef breeds, implants in Holsteins increase average daily gain (ADG) by 16 to 20%, and increase hot carcass weight (HCW) and Longissimus muscle (LM) area over their nonimplanted cohorts. Most implant studies in Holsteins have used multiple implants whereby a reimplant program is developed with the strength of an implant increasing across time or as cattle get larger. Please go to our website (www.gplc-inc.com/cherry-services/implant-protocols/) for a list of approved implants for use in the U.S. Note that strength can vary tremendously and certain implants are approved for steers, heifers, or both.

It is interesting to see in the study that the serum E2 concentration (Figure 1) reached a peak after 28 days of initial implant and dropped to a normal level (not different from the non-implanted steers) at day 84. After 14 days of reimplantation on day 84, serum E2 concentration reached another peak and was maintained at an elevated level throughout the rest of study. The interim ADG change of the Holstein steers parallelly correlated with serum E2 concentration change; the only interim ADG that was not different between treatments from day 56-84 was when serum E2 concentrations were not different on day 84. At all the other time points, both interim ADG and serum E2 concentration were elevated by implanting. This data indicates that elevated serum anabolic activity is required to sustain an improved growth performance for Holstein steers, which also means that multiple implants or long-acting slow releasing implants are needed if the feeding period was extended. In a later study conducted by the same group in 2020, with Holstein steers (initial BW = 996), a coated delayed releasing implant (Revalor-XS) was compared to two noncoated implants (Revalor-IS, implanted on day 0 and 56) during the last 112 days on feed. Results show there was no difference in ADG (3.92 vs 3.95), feed efficiency (0.146 vs 0.152) and carcass characteristics between the two treatments.

Coated or partially coated implants are designed to slow or delay the release of active components in the implant. When used properly it can eliminate the need for reimplanting which eliminates challenges of having to process cattle again. In a 360-day study (Merck Animal Health, 2015) conducted with calf-fed Holsteins (initial BW = 318 lbs.), Ralgro/Revalor-XS (implanted on d0/120, respectively) treated cattle performed equally to the Ralgro/Revalor-IS/Revalor-S (implanted on d0/120/240, respectively) treated cattle with reduced buller incidence (see Table 1 for the implant program). This means that one partially-coated delayed releasing implant, such as Revalor-XS, could be used to replace the re-implant program with one less implant date in Holstein steers. In the same study, the more aggressive implant programs (Ralgro/Revalor-IS/Revalor-XS implanted on d0/60/160, or Revalor-XS/Revalor-XS implanted on d0/160) exhibited less desirable feed to gain ratio, and worsened quality grade distribution when compared to the Ralgro/Revalor-XS, indicating that a moderate implant program is more suitable for calf-fed Holsteins.

The other major question is whether or not delaying initial implant for Holstein steers is beneficial after being put on feed. A commercial study conducted in 2019 used calf-fed Holstein steers (initial BW = 324 lbs.) to evaluate the effects of long-acting implant programs by comparing steers receiving Synovex C on arrival, Synovex One Feedlot on day 101 and Synovex Choice on day 271 to steers receiving Synovex One Feedlot on day 101 and Synovex Choice on day 272. Results show that including a low-dose implant (Synovex C) at arrival did not improve performance and was detrimental to feed conversion and buller incidences when compared to the delayed implant group, in which a Synovex One Feedlot implant was delayed to 101 days on feed. These results indicate that delayed implanting calf-fed Holstein steers up to 100 days on feed will not negatively impact the performance over the entire period. The feasibility of delayed implanting was also illustrated in other studies. There is less knowledge about the optimal weight for when to give the delayed implant to optimize overall performance. A 2017 sudy indicated that a numerically optimal growth-performance was achieved by Holstein steers (initial BW = 582 lbs.) receiving their first implant at an average weight of 642 lbs in a 224-day feeding period. A similar study achieved similar results. Therefore, a good target weight for the delayed implant program is when Holstein steers reach a bodyweight of 600-650 lb.

Nowadays the usage of implants combining estrogen and androgen is common. The adoption of combination implants in Holstein steers was approved more than two decades ago. Studies indicate that implanting with a combination of both estrogen and TBA was preferred to maximize ADG.

In summary, implants are a useful tool to use for finishing Holstein steers. Using newly approved coated implants increases days of hormone activity and eliminates reimplanting costs and risks. In Holsteins that are fed for a long period, lower dose implants are preferred as initial implants, building on strength as the feeding period progresses. If flexibility is needed by producers, delaying the first implant by about 100 days or when the Holstein steers reach a bodyweight of 600-650 lb appears to not compromise performance. Implants combined with both estrogen and androgen are preferred, especially during the later phases of the feeding period. Please contact us if you would like to discuss your implant program with one of our consultants.

Visit Great Plains Livestock Consulting’s website for additional information on this and many other topics, www.gplc-inc.com. For references on the scientific studies mentioned in this article, email editorial@feedlotmagazine.com