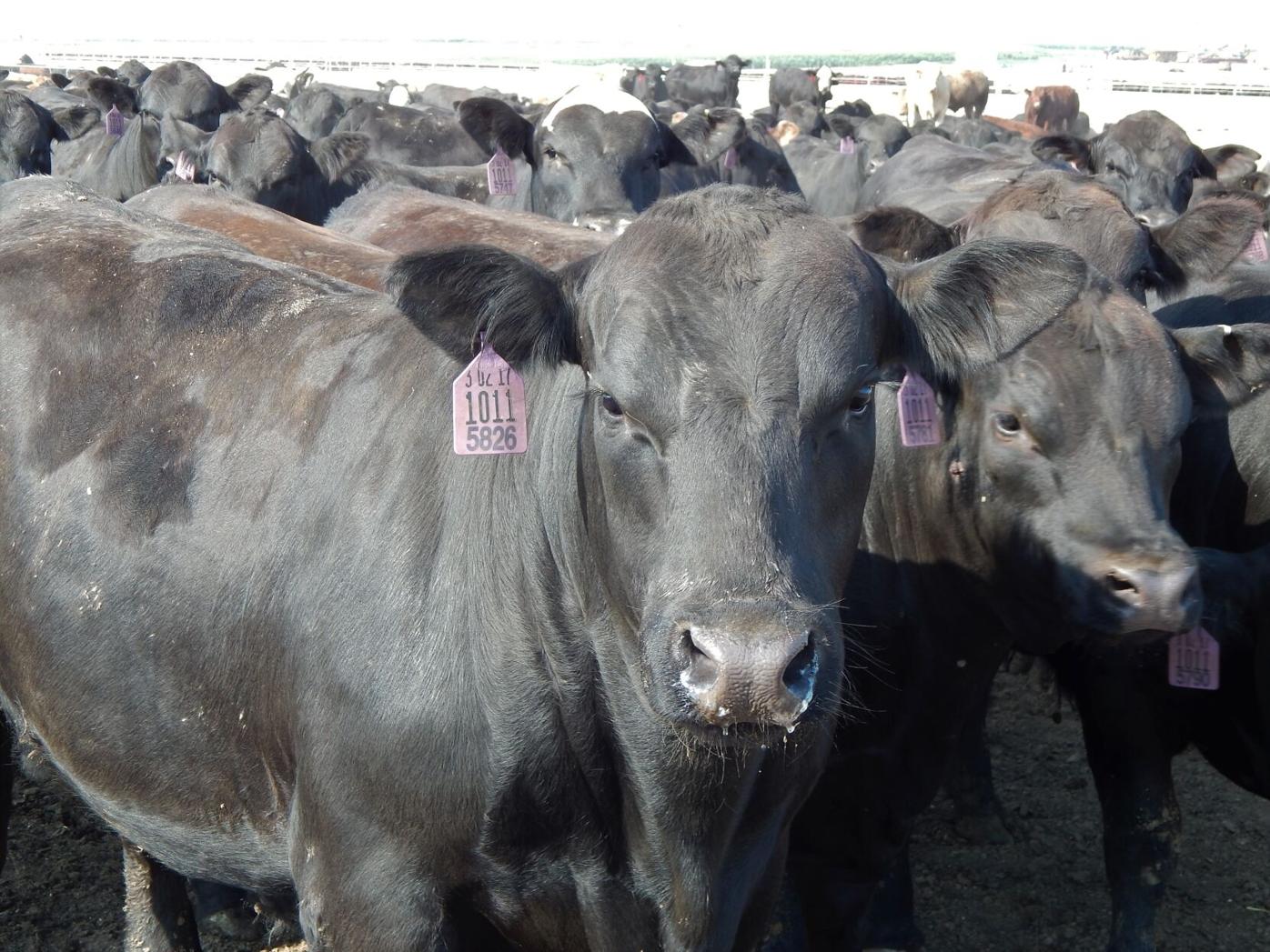 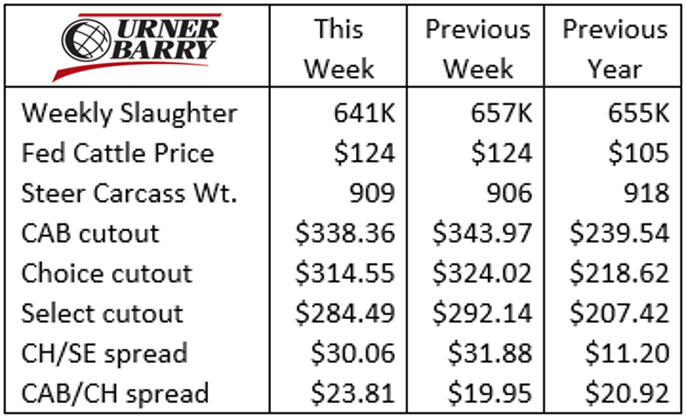 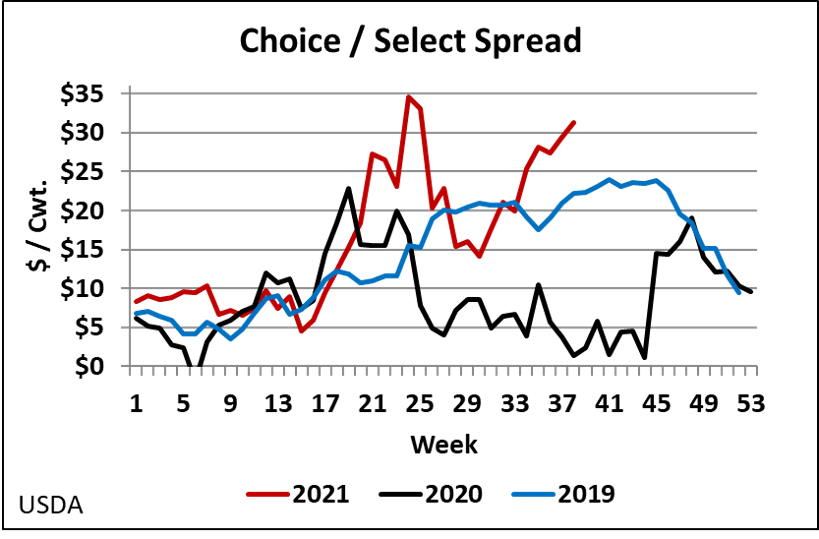 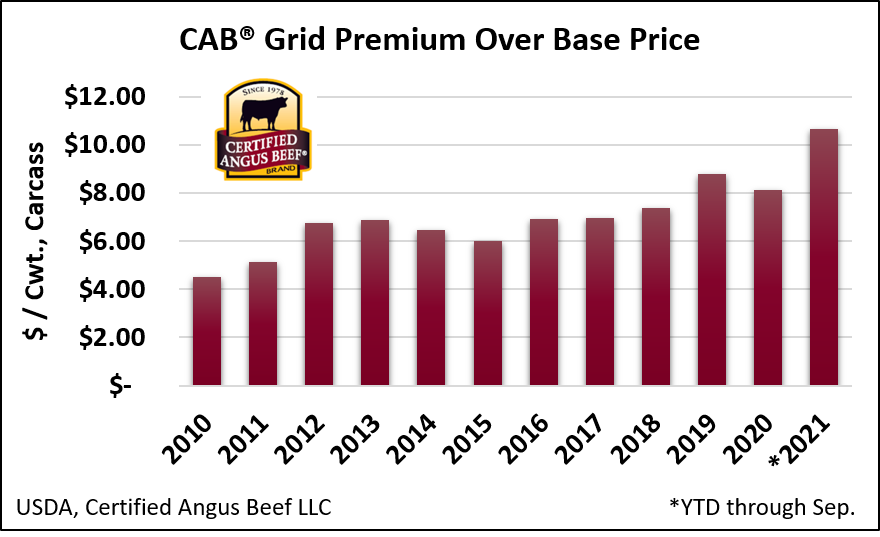 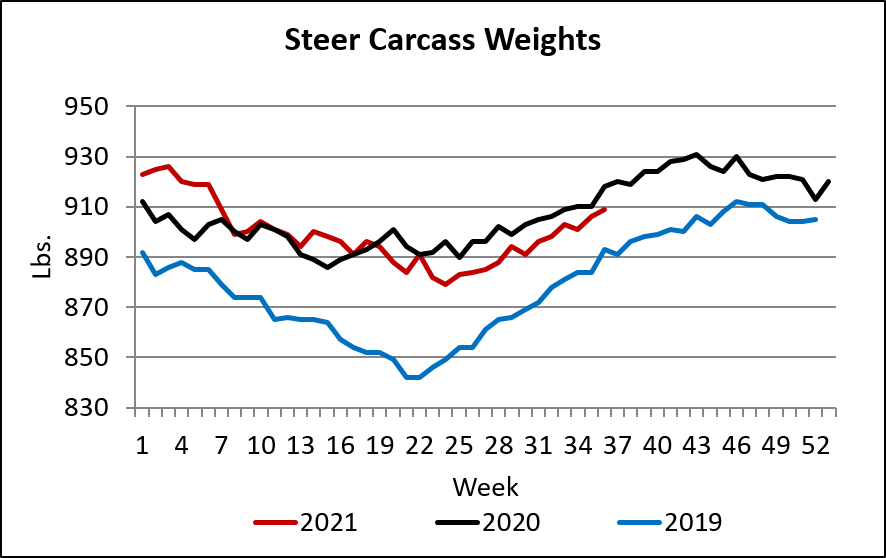 Fed cattle prices remain locked within a range of $120 to $125/cwt in what has become an extremely long 16-week period. The fact of the matter is that market-ready steers and heifers have, in total, been readily available for purchase throughout this extensive timeline.

It has been disheartening for the production sector to watch boxed beef prices ratchet rapidly higher through the summer, while cattle prices stagnated. However, with wholesale beef values quickly giving up ground, the steady fed cattle market feels slightly better. Equilibrium between live cattle and boxed beef prices is far from a reality today, yet one must bear in mind that cattle values, based on supply and throughput, could be worse than they are.

Last week’s 641K head weekly slaughter reflects a few days of downtime on the part of one major packer’s fall cooler cleaning. It’s said that more of this is expected in the upcoming weeks as packers prepare for the slaughter pace required to get through fourth quarter demand.

The September 1 Cattle on Feed report, released last Friday, surprised analysts with August placements up 2.7% over last year and 7.2% compared to the five-year average. Additionally, the cattle on feed number as of September 1 was estimated at 3.7% larger than a year ago. These metrics translate into bearish market news in the short term, in a market that has more positive long term feel than the report’s reactions will generate.

The boxed beef market is showing significant signs of cooling off as September draws to a close. Of course, the degree to which prices are cooling is only in relation to record high territory, so the discussion must be placed in that context. Even so, the CAB brand cutout price has come down $12/cwt. from the summer high of $354/cwt. three weeks ago. It’s rare that the production side of the market would cheer lower boxed beef prices, but given the current price points, that is exactly what some would suggest will protect current red hot beef demand.

Looking across the average of CAB carcass subprimal pricing, last week’s report shows softening values for everything except for the rib primal. Ribeye prices remained untamed in the CAB weekly data from Urner Barry. Yet, commodity Choice ribeyes finally showed a slightly lower trend to round out last week with further pressure early this week.

In the last Insider we focused on record-high ribeye prices and the associative effect that this has had in pulling other steak cuts higher as well. While total carcass cutout values have been softening over the past two weeks, last week’s summary report showed the rib primal hanging on for what appeared to be the last week of higher prices, while every other carcass primal priced cheaper at varying degrees.

Strong ribeye demand has had heavy influence on cattle values for feeders selling on a grid or carcass value formula. Just as Prime quality grade premiums held much higher than expected late this summer, the Choice/Select price spread has popped back up within reach of record territory once again in recent weeks. Along with that, the CAB carcass premium over Choice in boxed beef has placed the CAB carcass at a $23.81/cwt. premium. This was bested only by the $25.55/cwt. CAB/Choice spread posted in June of 2021 and the $33.02/cwt. record-high induced by pandemic chaos in May of 2020.

What we’re seeing today in the quality price spreads is a continuation of supply and demand. Demand is swift for ribeyes and few are placing orders for Select. However, the tremendous spread between quality grades and brands does have some retailers bargain shopping or pushing back as they see sticker prices escalate. Demand for high quality is the overarching theme, as can be seen in the price trend data.

For cattlemen this scenario is telling of three factors. First, it’s evident that the sales side of the beef business would benefit from greater supply. Current processing capacity, regardless of reason, is not ample enough. We know this because price is used to ration supply in a commodity business, and price differentials become exaggerated when supply underperforms relative to demand.

Second, there is great reason for cattle feeders and ranchers to continue to place emphasis on cattle that will achieve the quality grades and branded beef standards associated with premiums. The marketplace is full of surprises in the modern era. Yes, the quality premiums fluctuate seasonally, but most of the surprises in the past multiple months have been in the form of higher premiums for feeders with cattle that can deliver on high quality in relation to commodity price levels.

Third, the seasonal trend for lower marbling, and consequential quality grades, has taken the share of Choice and Prime carcasses to what should be their late summer lows in the latest data. The historical perspective, however, is that richly marbled carcasses are near a record proportion of the total mix in the same timeframe that premiums for those same carcasses are record high. Consumers continue to cast their votes with their pocketbooks, opting for higher quality beef just as cattlemen have collectively delivered our best yet.

The fall season brings us nearer to anticipated annual heaviest carcass weights, typically posted in late October or November. In 2020, the pandemic and fed cattle backlog set carcass weights 26 lb. heavier than the prior year. The historic anomaly compares to expected annual increases of just 5 lb. per year.

The beef sector has yet to see a substantial pull-back from these heavier carcass levels in 2021. Believe it or not, weighted average steer and heifer carcasses are just 1 lb. shy of the 2020 record-highs through the first week of September. Weights continued to set records early this year, besting 2020 by averaging 9 lb. heavier through April. Since May the pattern has settled lighter than last year, averaging 10 lb. below 2020.

Latest year-on-year data shows steer carcasses were 9 lb. lighter in early September, with heifers just 1 lb. below a year ago. It appears that current feedlot inventory of cattle on feed more than 150 days is slightly below a year ago, but well above the five-year average. As we head toward the fall carcass weight highs, it appears the trend for heavier, longer-fed cattle will be supportive to carcass marbling levels and quality grade. This is a very small underpinning in a market with a high demand for quality carcasses.