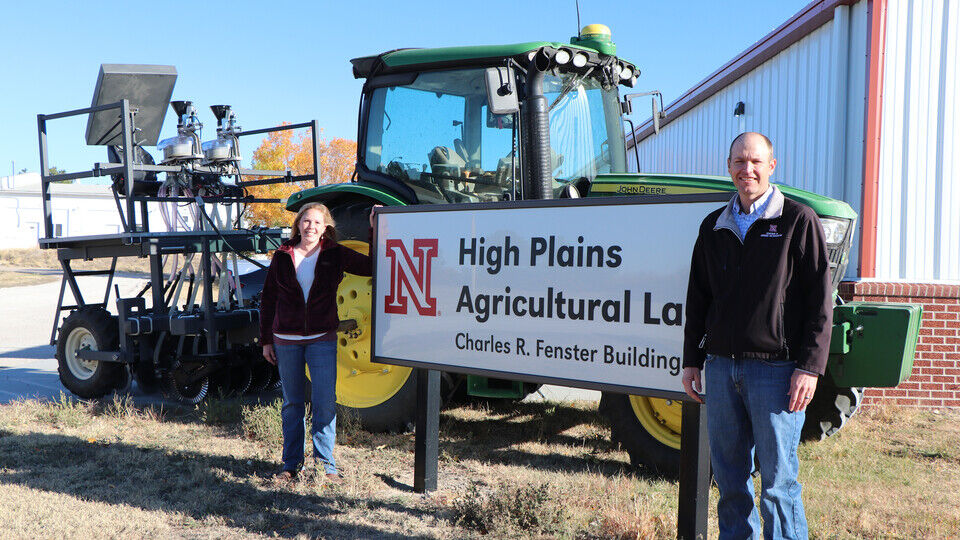 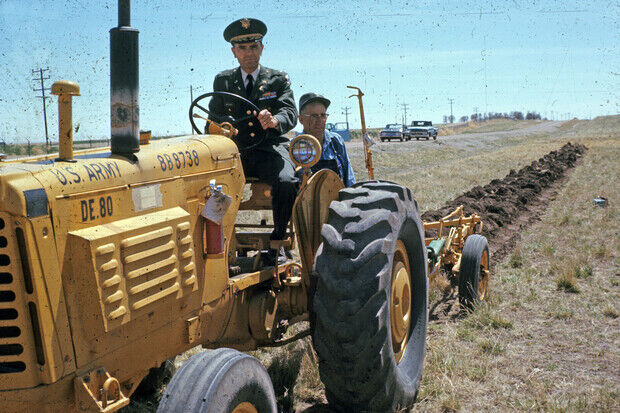 On April 17, 1967, Ray Cruise, president of the Cheyenne County Rural Area Development Committee, and Col. C. Williams drew a symbolic furrow on what had been named the High Plains Agricultural Lab.

As the new year begins, all is quiet at the research plots at the High Plains Agricultural Lab 6 miles northwest of Sidney. Winter wheat fields are dormant, and other fields await the spring planting season.

But inside, scientists and support staff are analyzing data, planning for 2021 and doing other tasks to carry out research aimed at helping crop and livestock producers in this semi-arid region be more efficient, sustainable and profitable.

The High Plains Ag Lab is operated by the University of Nebraska–Lincoln’s Institute of Agriculture and Natural Resources, under the supervision of the Panhandle Research and Extension Center at Scottsbluff, 75 miles to the northwest.

It was 50 years ago last August that the U.S. Department of Defense deeded more than 2,000 acres of land, previously part of a military munitions depot, to the University of Nebraska for research. Since then, the lab has helped bring about some notable advances in crop and livestock production. It enters its sixth decade with improved and expanded facilities, equipment and capacity, and a new role as the base camp for the Nebraska Variety Testing Program.

The High Plains Ag Lab’s 2,410 acres consist of working laboratories for both crops and livestock research: 710 acres for crops divided into 17 fields, with the remaining 1,700 acres for grazing land, divided into 12 pastures. A new office-research building was constructed in 2015.

The 50th anniversary normally would have been observed during a summer field day. But the COVID-19 pandemic intervened to change things in 2020. Instead of hosting group tours of the plots, the lab created video tours of research going on at the plots and posted a virtual field day on the web.

Also utilizing the lab are other Husker faculty based in Scottsbluff with expertise in soil science, nutrient management, plant breeding, plant pathology, entomology, weed science, economics, forage and range management, and yearling stocker grazing systems. Local faculty and staff collaborate with Lincoln-based IANR faculty, as well as researchers from other universities and the U.S. Department of Agriculture’s Agricultural Research Service.

Strategic direction is provided by an advisory committee of local stakeholders, chaired by Keith Rexroth, a Sidney farmer.

The office and laboratory building dedicated in 2015 is named for Charles R. Fenster of Gering, a pioneering Husker cropping systems specialist. Fenster, who retired in 1982 and died in 2016, was the first faculty supervisor at the High Plains Ag Lab and was instrumental in its establishment. The 2,800-square-foot building provides offices for permanent staff, workstations for students or visiting scientists, a conference room, and space for processing and analyzing seed and plant material.

In 2019, the lab became the new home of the Nebraska State Variety Testing Program, led by Creech and Easterly, who hope to develop the program into a leader regionally and leverage new research opportunities. The program includes not only winter wheat, but spring wheat, corn and grain sorghum. Additional crops will follow in 2021.

New equipment and technology acquisitions are bolstering the High Plains Ag Lab’s research capacity. A plot combine makes harvesting quicker, improves data collection and provides in-cab sampling. The lab also acquired equipment to generate barcodes to streamline data capture and equipment to test the protein content of grain in-house. The staff constructed a new research drill for planting wheat, which allows for precision application of seed and fertilizer and is fitted with GPS.

Although the university formally acquired the High Plains Ag Lab in 1970, the groundwork had been laid nearly a decade earlier by a group of area ag and business leaders who saw the need for a research facility to address problems specific to the High Plains. Sidney is 350 miles west of the University of Nebraska–Lincoln, 3,500 feet higher in elevation and receives about half the annual average precipitation.

The lab’s origins are described in “College of Agriculture of the University of Nebraska–Lincoln: The First Century,” a book by Elvin Frolik and Ralston J. Graham published in 1987. As Frolik and Graham tell it, the work of the Cheyenne County Rural Area Development Committee, largely through its crops committee, was instrumental. They lobbied the University of Nebraska, Nebraska State Legislature and Department of Defense for support, funding and the needed land.

In 1964, there was a severe outbreak of black stem rust, wheat streak mosaic, and crown and root rot of wheat in the Panhandle. That same year, the Department of Defense announced it would phase out the Sioux Army Ordnance Depot. The committee explored the possibility of using some of the land and facilities.

The ordnance depot was established in 1942, according to the Nebraska State Historical Society. Its mission was the receipt, storage and issue of all types of ammunition, from small arms to 10,000-pound bombs; all types of general supplies from small automobile parts to jeeps; and other strategic and critical materials. It was vast, occupying 19,771 acres with 801 concrete ammunition storage igloos, 22 warehouses, 392 support buildings, 225 family living quarters, 51 miles of railroad tracks and 203 miles of roads. The depot was deactivated in 1967.

In 1965, the Nebraska Legislature approved a bill to establish the experiment station and appropriated $100,000 in funding. In 1966, the University of Nebraska Board of Regents applied to the U.S. government for a transfer of land, improvements and equipment. After lengthy negotiations, the government issued an interim use permit. In 1967, the U.S. government made available to the university 2,410 acres of land, along with 14 round igloos, two warehouse buildings, a headquarters building, farm equipment, industrial equipment and tools. In 1970, the federal government deeded the land to the university.

Fenster was the first faculty supervisor. Others have included David Baltensperger, Drew Lyon and Creech, all faculty members based in Scottsbluff. The RAD Committee was terminated in 1971, and then-Director John L. Weihing of the Panhandle Station named members to the lab’s advisory group.

The university provides the facilities, faculty, staff and equipment to conduct research. The lab receives additional support from commodity groups, industry and others.

Crop research at the High Plains Ag Lab typically consists of 25 or more trials per year. The primary focus is key production issues such as integrated management of weeds, diseases and pests in winter wheat and sunflower. The lab also hosts grazing supplementation research, focusing on integrated crop and livestock systems. Strategies include improving cattle performance with supplements to cool-season grasses, which have less nutrition value late in the summer, and supplementation and marketing strategies for yearlings on grass.

The High Plains Ag Lab has played a major role in developing dryland tillage systems such as eco-fallow, stubble mulch and flexible fallow. Other notable research:

> Cattle production systems from weaning to slaughter, and use of locally grown feedstuffs for supplementation.