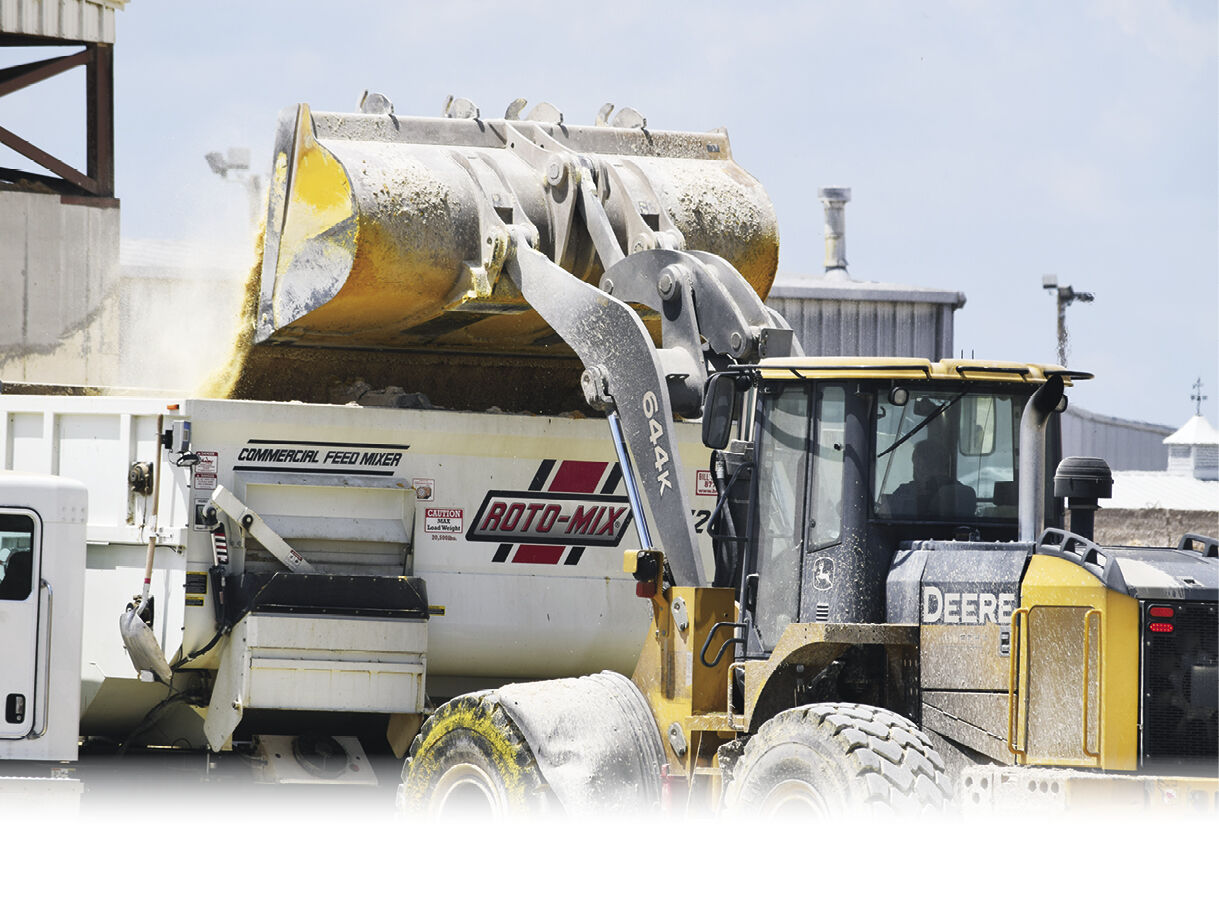 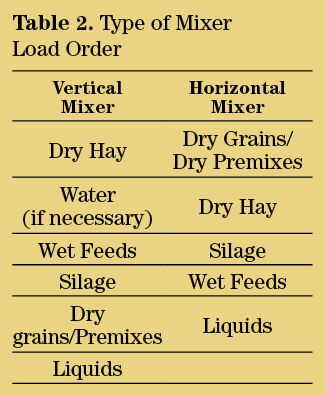 Cattle are creatures of habit. Delivering an accurate ration across the entire bunk every feeding is often overlooked but provides the consistency that they crave. When feeding cattle a total mixed ration (TMR), there are four components you need to consider: the ration formulated on paper, the mixed ration, the ration the cattle consume, and the ration that is refused. The goal of TMR processing is to minimize variation and make the four rations as consistent/accurate as possible. Variation in a ration reduces your ability to deliver the properly formulated ration to cattle, affecting both the production and overall animal health. It increases the risk of ruminal acidosis, causing differences in feed efficiency and performance among groups, even when the breed, source, age, weight, and history of the cattle are similar. Properly processing the TMR ensures what is delivered and consumed are consistent with what is formulated, as well as reduces the opportunity for sorting and separation. Factors that contribute to TMR inconsistency include over filling the mixer wagon, ingredient processing/variation, inadequate mixing time, worn out equipment, unlevel mixer, incorrect ingredient load order and inaccurate ingredient measurement at loading, and lack of ration moisture.

A common tool used in the dairy industry to measure particle size variation in a TMR on farm is the Penn State Shaker Box. The apparatus consists of 4 boxes that stack on top of one another. Boxes are stacked according to hole size of each sieve, with the top box having the largest holes, working down in size to the bottom solid pan. Usually 10 samples per load of TMR are measured. The average percentage of feed on each screen box after shaking and coefficient of variation (CV) are calculated for each load. The CV is a measure of consistency, the lower the CV, the better the consistency. Feed refusals could also be sampled and measured to compare to the TMR. The closer all screen boxes are to having the same percent of material settling onto them from the TMR as compared to the partially consumed ration or refusals, the less cattle are sorting the ration. Reading bunks and monitoring manure scores across the pen are also good indicators of ration consistency, if cattle are not sorting feed the manure will be the same among all animals. Well mixed TMR should observe no clumps of hay, streaks of feed and/or inconsistent particle size, and balls of wet feed such as wet distillers grains along the feed bunk.

Mixing the correct load size for your mixer reduces variation (i.e. lower CV) in the TMR particle size and nutrient measurements when compared to over-filled loads. Load size is typically measured in cubic feet. This varies with roughage inclusion, moisture, and total pounds mixed. Proper mixing requires ration ingredients to fall into an open space created by the mixer paddles in a horizontal mixer, or by the screws in a vertical mixer. The TMR will not mix when load capacity exceeds mixer capacity, so do not over-fill your mixer wagon. Too small of a load size should also be avoided, as ingredients of minor amount (such as minerals) might get hung up on screws and not be completely dispersed throughout the ration. This is especially true for vertical mixers. To get an accurate mix in a vertical mixer, load ingredients to fill to the top of the mixer.

Processing/grinding of ingredients, such as hay, is recommended to be done ahead of time. Even if using a vertical mixer, having the hay/forage processed is still recommend as vertical mixers don’t usually grind hay to an adequately small size (0.5 to 2.0 inches). Loading processed hay from the pile is faster and more accurate, resulting in a more consistent TMR. If corn silage or other fermented feeds are used in the ration, make the silage face flat and vertical, blend faced silage into a pile to minimize variation in the silage, as well as the TMR. Having an accurate dry matter and nutrient profile of your silage will also aide in delivering a more accurate ration.

Processing time in the mixer wagon is an important factor affecting TMR consistency. It is recommended feeds are mixed for a minimum of 3-5 minutes after the last ingredient is loaded. Also, don’t over mix beyond what is necessary as it adds time to feeding, takes more fuel and is more wear on equipment. A research group from Italy recently (2020) assessed the effects of TMR processing time on its physical and chemical characteristics, consistency, and impact on performance of young backgrounding bulls. Identical rations were processed in a vertical single-auger mixer for two different lengths of time: 20 mins (short mixing time, SMT; time spent to load all ingredients, drive to pen and unloading) or 30 mins (long mixing time, LMT; 10 more minutes beyond SMT). No difference in chemical composition was observed between the two diets. However, the prolonged action of knives of the mixer wagon on particles in the LMT treatment reduced the overall particle length, long particle proportion, and physically effective NDF of the TMR, while the fine particle proportion was increased. An increase in sorting in the SMT treatment was recorded due to a significant amount of long particles still present. The variation in rumination and activity among pens was reduced in the LMT treatment. Prolonged mixing time increases the consistency of the TMR, which was indicated by lower variation in diet compositions (such as crude protein, aNDF and starch) between pens and between sampling days. The more consistent ration likely improved ruminal digestion of the ration, resulting in an improved daily gain and feed efficiency for cattle fed the LMT treatment (Table 1).

Proper ingredient load order is always desirable to get a consistent TMR, and it should be based on kinetics of blending rather than on convenience/preference. Depending on the type of mixer, our recommended load order of vertical vs horizontal mixers is shown in Table 2. Some basic principles for ingredient loading: add lower inclusion ingredients early in the mix, make pre-blends if possible, blend like-ingredients together, and avoid direct contact of wet sticky by-products with fine particle dry feeds (ex. mineral supplements). Liquid ingredients should be added last with a spray bar, if possible, to evenly distribute the liquid across the load. Don’t add liquid ingredients first, especially to the horizontal mixer, for the liquid dropped directly onto the paddles/screws and box wall will stick on them and will not be mixed effectively. The mixer wagon needs to be in a level position when loading and mixing to avoid heavy ingredients migrating to the lower part of the wagon, and it also helps improve scale accuracy. It is recommended to load each feed ingredient at the center of the wagon to allow better processing and mixing. This is especially important when baled hay and liquid is to be loaded to a vertical twin auger mixer. In vertical mixers, ingredients added at one end of the mixer tend to stay at that end.

The mixer wagon should be serviced routinely and maintained in good working condition to achieve the best mix. Examine the auger, blades, kicker plates, knives (on vertical mixer), and the mixer walls (for weakness due to stress), regularly; replace the worn parts in a timely manner. Worn equipment decreases mixing consistency and efficiency. The scale needs to be checked routinely with a known weight put in each corner of the mixer box and calibrated as needed by professionals. Correct scales ensure that an accurate amount of each ingredient is loaded into the wagon. Follow proper horsepower recommendation when choosing a tractor to run the mixer; clean the magnets on the unloader routinely so they catch any foreign metal material that may get mixed into the feed more efficiently.

Good mixing practices should be used for each load to minimize ration variation. With properly maintained equipment, proper mixing order and time, proper loading location with a level mixer, and properly processed ingredients, a consistent TMR will be delivered and consumed by your animal every day. If you would like to discuss more about TMR processing, one of our consultants would be happy to assist you.

Great Plains Livestock Consulting can create a custom plan for your operation. Learn more at www.gplc-inc.com