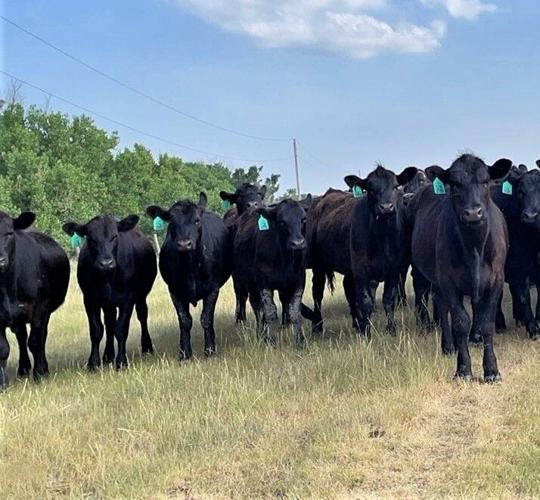 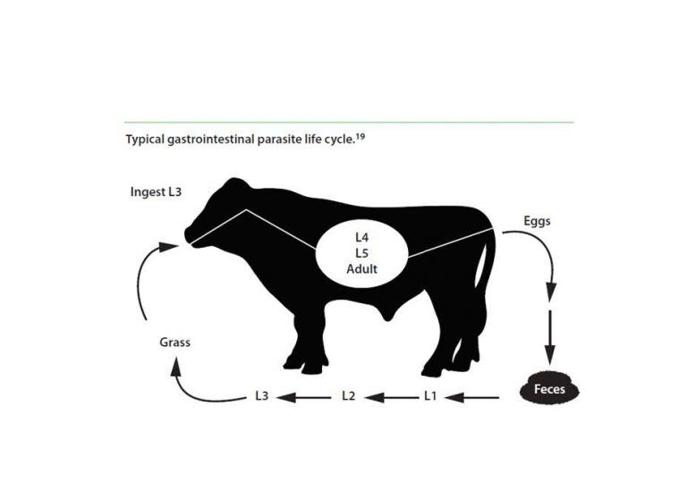 Parasitic worms of cattle include the nematodes Ostertagia, Cooperia, and Haemonchus. The worm’s life cycle occurs within cattle and on grass. Worm reproduction occurs within cattle intestines. Eggs and the first two larval stages are found in feces. The third infective stage (L3) resides on grass, and the last two larval stages and adult worms are found inside the animal. One female worm may produce tens of thousands of eggs.

Temperature, moisture, and grass management profoundly influence the population of the infective L3s. Infestation is highest during spring and fall when precipitation is plentiful, temperatures are moderate, and grass if rapidly growing. During such times, 99% of the total worm population is found on grass. Pastures are not treated to kill these larvae. Current deworming products are administered to cattle to kill the intestinal larval stages.

During hot and dry times of the year, much of the worm population resides inside cattle and can re-infest pastures when environmental conditions improve. For example, Ostertagia will ‘hibernate’ within the animal’s gut in a state of hypobiosis during times of suboptimal grass conditions. L3 themselves do not feed; they need to be consumed so that their life cycle continues inside the animal. Hot and dry pasture conditions will dry them out and speed their consumption of body reserves.

Talk with your veterinarian and/or nutritionist about deworming cattle during hot, dry weather when worm populations are likely to be high inside the animal. A fecal egg count (FEC) of 20 animals or 20% of the herd (whichever is greater) can provide an indication of overall worm burden. After deworming, a fecal egg count reduction test (FECRT) should be used to gauge the treatment’s efficacy; less than 90% reduction indicates worm resistance. Typically, the FECRT compares pre-treatment FEC to a 14-day post treatment FEC. A minimum of six but preferably ten to fifteen animals should be sampled for FECRT. Research indicates its better to compare pre- and post-FEC on individual animals rather than pooling the samples. With evidence of resistance, lab identification of the surviving worms becomes critical for managing them.

L3 are present when temperatures and rainfall support actively growing grass. Infective L3 remain close to the soil surface where moisture levels are more consistent. As a rule of thumb, when weather conditions support a morning dew, larvae are up on the grass waiting to be ingested. Four inches is considered the maximum vertical height larvae can achieve. Maintaining a minimum of four inches residual plant height and using an appropriate stocking rate will balance utilization of the pasture and minimize risk of exposure to larvae.

Cattle on intensively managed rotational systems will be grazing actively growing grass that better supports larval survival, so it is important to not allow the cattle to graze below four inches grass height. When short rest periods between grazing events are used, the return to the paddock will coincide with high L3 populations resulting from eggs deposited and larval maturation from the previous grazing cycle.

Gastrointestinal Parasites and Cattle in Wisconsin: Understanding and Managing the Relationship provides additional information about this topic.